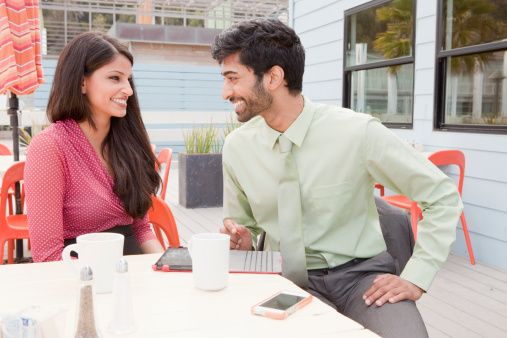 BOSTON, MA – Earlier this week, 25 year old Karthik Patel had successfully set up a day to meet a girl he had been messaging on popular South Asian dating app, Dil Mil.

“Kk see you Friday!” read the text he received from 24 year old Priya Sharma. Mr. Patel suggested that he and Ms. Sharma meet up at a local bar for a drink. He had been there once and the ambiance was ‘chill enough’ for a date.

Upon her arrival, Ms. Sharma realized, to her dismay, that the bar which Mr. Patel had chosen had several televisions all with various ESPN networks being shown.

While talking about how much they ‘love travel’ and how Mr. Patel goes home every weekend to get Indian food from his mom, Ms. Sharma appreciated that he had barely glanced at SportsCenter being shown on the TV behind her. An hour and half later, Ms. Sharma politely left and told Mr. Patel that she had had a “really good time.”

Upon asking Ms. Sharma how she felt about the date she said, “He was cool! Cute and actually really funny. Plus he didn’t talk about how he wants to get an MBA the entire time – better than most dates I’ve been on.”

“She was super chill and smart. I think I’ll ask her to watch the Pat’s game at my friends place next week”, remarked Mr. Patel.